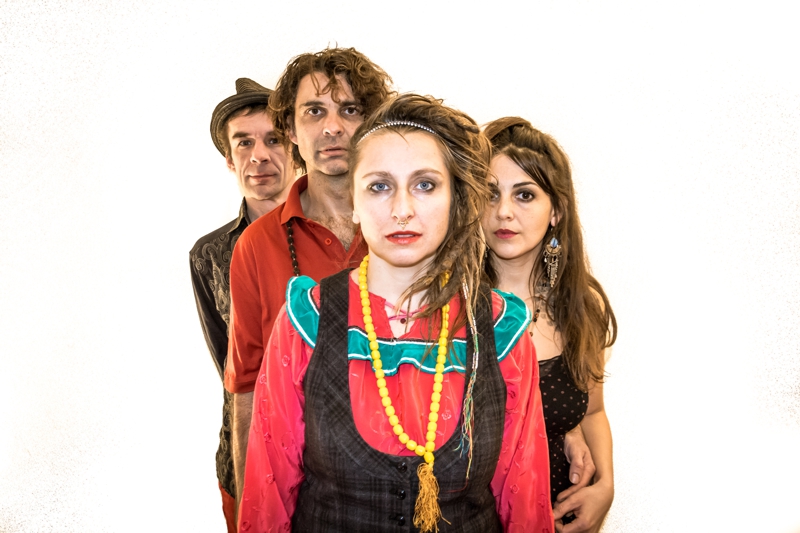 This is the wild side of Bhakti!

Definitely most ecstatic band in Europe!

The musicians met 2014 in Berlin at the “Mantra Tribe Chanting Party”, organized by FlorAmor. Playing together quickly made them aware of the uniqueness of their sound and in 2016 the band “Mantra Tribe” was officially established.

The Indian Goddess Lakshmi comes as a disco-diva. Shiva and Kali open the doors into the shamanic trance, tribal beats and wild pogo punk! Welcome back at the intoxicating ecstatic journey!! Mantra Tribe have stepped up their game: the new album sparkles with a variety of playfully woven elements, presenting the band’s next-level achievement.

The Tribe is fuelled by …

Together, FlorAmor (voice, harmonium, shaman drum) and Jasmin Aynacioglu (voice, harmonium, small percussion) present the complementing female vocals which celebrate the beauty of mantras and elevate the wildness of tribal beats, surrendering to the flow of Shakti.

Multi-instrumentalist and band producer Danilo Ananda Steinert (guitar, drums, voice and more) is the musical brain. He draws from 30 years of powerful presence in the yoga and spiritual world music scene, supporting Mantra Tribe with his wide range of skills and abilities.

Marc Miethe is widely recognized as one of the most accomplished Didgeridoo-Gurus in Germany since 1992.  His virtuoso earth-rooting bass resonates into the profound depths of trance. A wind-born wunderwerk, vibrating deeply into the soul!

Wow, what a great evening! In 3 years of Ecstatic Dance I haven’t sweat that much (Ana) … You have washed all my sh*tty pretentious holiness away (Sabine) … Your music is so full of life and energy. It is so alive, creative and surprising – really cool and so sexy! (Anugraha) … Omg, I have to move back to Berlin!!! (Katrin) … This has been a marvelous night, I wish I could listen more to this wonderful chanting (Ezequiel) … Thank you for the wonderful, heart-opening evening, it was bliss for the body, mind and soul! (Aylin) …. My body was vibrating until 3 am.. (fan at Xperience Festival) … Four hours are definitely too short! (Lars, after four hours of ritual concert)