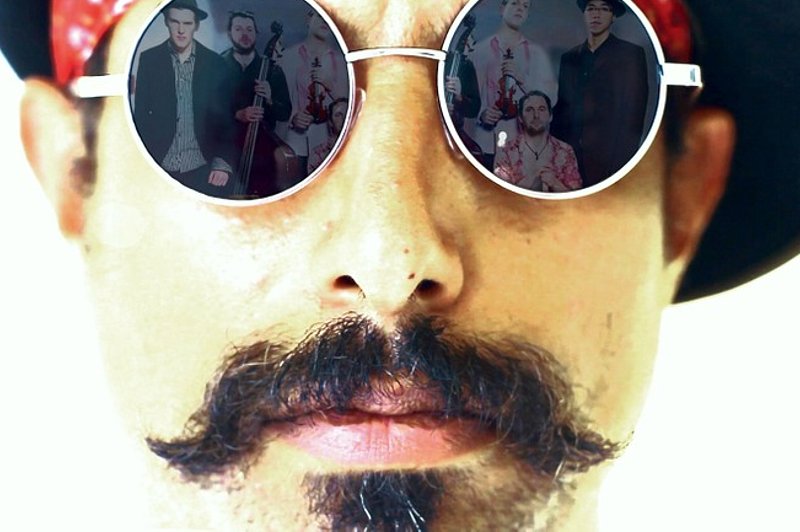 To simply categorize the style of this Berlin–based sextet as „gypsy swing“ would not do them justice. Although the tradition of Jazz Manouche underlies the foundation for many of their original songs, Django Lassi keeps their tonal horizon open in many directions, extending well beyond Reinhardt-esque compositions, to wild poetic balkan dances, to electro-swing trance with freestyled lyrics. The bands diverse influences fuse into an irresistibly danceable experience.

It was 2005 when baby Django Lassi set out on their humble mission to spread gypsy jazz in Berlin. The early nights were filled with gigs in seedy taverns, shady organizers, and sprawling backyard parties. Here the ensemble quickly found their way into the hearts and especially in the legs of their listeners. Eight years later, Django Lassi is well known in several neighborhoods in Europe, as a party band, but also a musical one, on the one hand rocking the „Fusion“ festival but also performing with renowned colleagues such as the Rosenberg Trio.

As the Lassis‘ path continues, the next milestone is ‚Szupa Czipa‘, their new album of original songs, which was released in November 2013. It is a furious inventory of the music the band has developed for last two years. The sextet combines four nationalities today (Israeli-Ivorian-German-American) and speaks several musical languages: virtuoso gypsy swing is still at the base, but the vocabulary in their own compositions evokes their trips to Romania, the Balkans, Anatolia, Spain, and beyond. And Django Lassi has a new voice: Since 2010 Roland Satterwhite plays not only the violin with the group, but also sings a mixture of blues and wild freestyled vocal discharges.

Although Django Lassi’s musical transgressions might offend traditionalists, those who attend their concerts appreciate the experimentation and spontaneity of the musicians. Django Lassi started with the sinti swing tradition, but they continue to expand, and create new and exciting blends of original sounds. 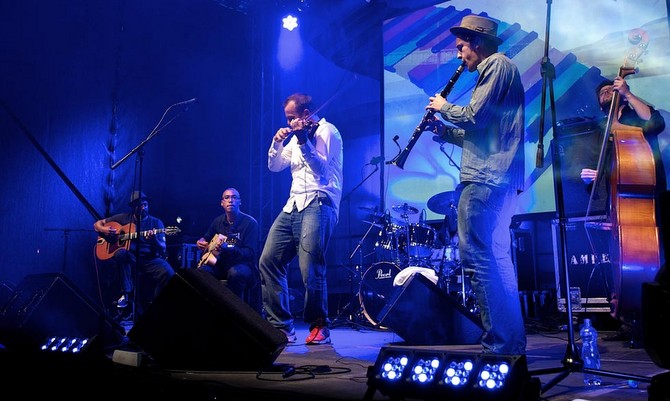 Roland Satterwhite – Born in British Columbia, Canada, Roland grew up in Seattle and moved after his studies to New York City. there he began to work as a biologist, but soon devoted himself entirely to music: as a singer, violinist, composer, and producer. So far he has released four albums with his own songs. Roland plays mainly improvised music, but works together with musicians from all different genres. Roland has lived in Berlin for 5 years. He plays regularly with Django Lassi, Konjaleo, as well as others.

Yasir Abdulkadir Hamdan – Born in Munich, his father is from former Yugoslavia, Eritrea, and his mother-Hungarian. After school, he toured several years with a professional theater in Germany and played in various bands. During that time he played the Electric bass, acoustic bass and guitar. In 1998 he studied acting in Bremen, through which he became acquainted with the music of Eastern Europe and Jazz Manouche. With these influences, his interest in composing grew. His compositions stretch boundaries in music and transcend any particular country or culture. 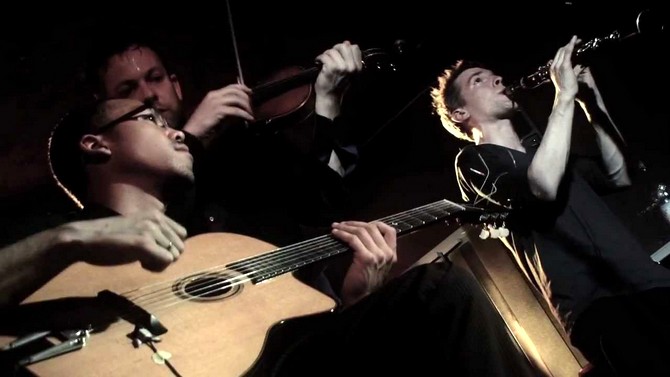 Laurent Humeau – A true talent from the Ivory Coast, Laurent is a young dynamic musician who has mastered many instruments, and participated in various music projects across Europe. From Balkan to Jazz Manouche to Dixieland, he presents his artistically rich profile in prestigious locations in Berlin and beyond. He switches from rapid guitar solos à la Django Reinhardt to the soprano saxophone to swing to Balkanbeats, with versatility and cool charm.

Der Klark – In reality named Christopher Schintlholzer, he plays the double bass. For more than 15 years he has played in various musical projects. Born in Cologne, but living and working in Berlin since 2000, Klark is a co-founder of Django Lassi. He is a versatile musician with a rich musical background, who established his name through numerous appearances and participations in different Rock/Pop- and jazz groups as an electric bass player, double bass player and electric guitarist, varied in style and confident in groove, Klark is a sought-after bassist.

Yatziv Caspi is a professional musician who played in several local and international ensembles as a drummer, percussionist and tabla player. With more than 27 years of experience in playing almost any style in music, he has managed to shape his own way of playing and sound. Yatziv is also a professional Tabla player and a master in north Indian Classical music, beginning a journey 1996 to intensely explore the world of the Tabla (Indian drum) and to apply it on his own drumming and music.

special guest Jonas Müller – Born in Rønne, Denmark 1975 he started playing the piano at the age of nine. Playing mostly Western classical music he soon developed great skill and won second place in a youth classical piano contest in Denmark. A stay in Tanzania as a teenager opened his eyes to jazz and African music and he was soon playing jazz concerts with other musicians. Returning to Denmark the African-American jazz piano legend Horace Parlan became his mentor for 6 years. Later h attended the Conservatory for jazz, rock and popular music in Copenhagen and took a master’s degree in contemporary composition at Mills College in Oakland California USA. He released the CD „East African Prayer Meeting Suite“ which received a nomination at the 2008 Danish Jazz Awards. After he moved to France and started the world music group „Moulti Koult“ as well as the duo „L’est à l’ouest“. Over the years he worked with countless well known musicians including the free jazz legend John Tchicai and is now performing with Django Lassi.

„For their driving blend of jazz, swing and Balkan band Django Lassi is celebrated in Berlin’s clubs.“ Berliner Zeitung from 12/3/2013